(March 17, 2017, Cedar Rapids, Iowa) In our last blog post, we discussed the impact of the 2008 Flood, and how certain actions from Union Pacific Corporation (“UP”) and Cedar Rapids and Iowa City Railway Company (“CRANDIC,” wholly owned by Alliant Energy Corporation) allegedly turned what would have been a minor flood into a catastrophic disaster when UP and CRANDIC parked rail cars on rail bridges that were over 100 years old, apparently in an effort to prevent the bridges from collapsing. Unfortunately, UP and CRANDIC’s ancient rail bridges across the Cedar River collapsed under the weight of the rail cars loaded with rock.

Property owners in Cedar Rapids filed a Class Action Petition seeking monetary damages for the devastation caused to their properties by UP and CRANDIC. The case, Griffioen et al. v. Union Pacific Corporation, Union Pacific Railroad Corporation, Alliant Energy Corporation, and Cedar Rapids and Iowa City Railway Company, Iowa District Court for Linn. County, LACV078694; Iowa Supreme Court Case No. 16-1462, (click 1306 07 Petition to see PDF of Petition) now pending for several years, is headed to the Iowa Supreme Court. Plaintiffs’ counsel looks forward to proving at trial that excessive rainfall was not the primary cause of the devastating June 2008 flood in Cedar Rapids. In fact, Cedar Rapids and much of the rest of Eastern Iowa flooded in June 2008, because of man-made obstructions that blocked the Cedar and Iowa Rivers. In Waterloo, a bridge collapsed. In Cedar Rapids, several railroad bridges collapsed, and their collapse is the basis for Plaintiffs’ Class Action Petition. In Iowa City, temporary construction-related cofferdams (temporary enclosures built within or across a body of water) obstructed the River and caused extensive flooding. Although Plaintiffs’ case only concerns the Cedar Rapids bridges collapsing and causing a disastrous flood in Cedar Rapids, the overall severity of the June 2008 flood is largely attributable to these man-made obstructions.

A Chronology of the 2008 Flood in Eastern Iowa: 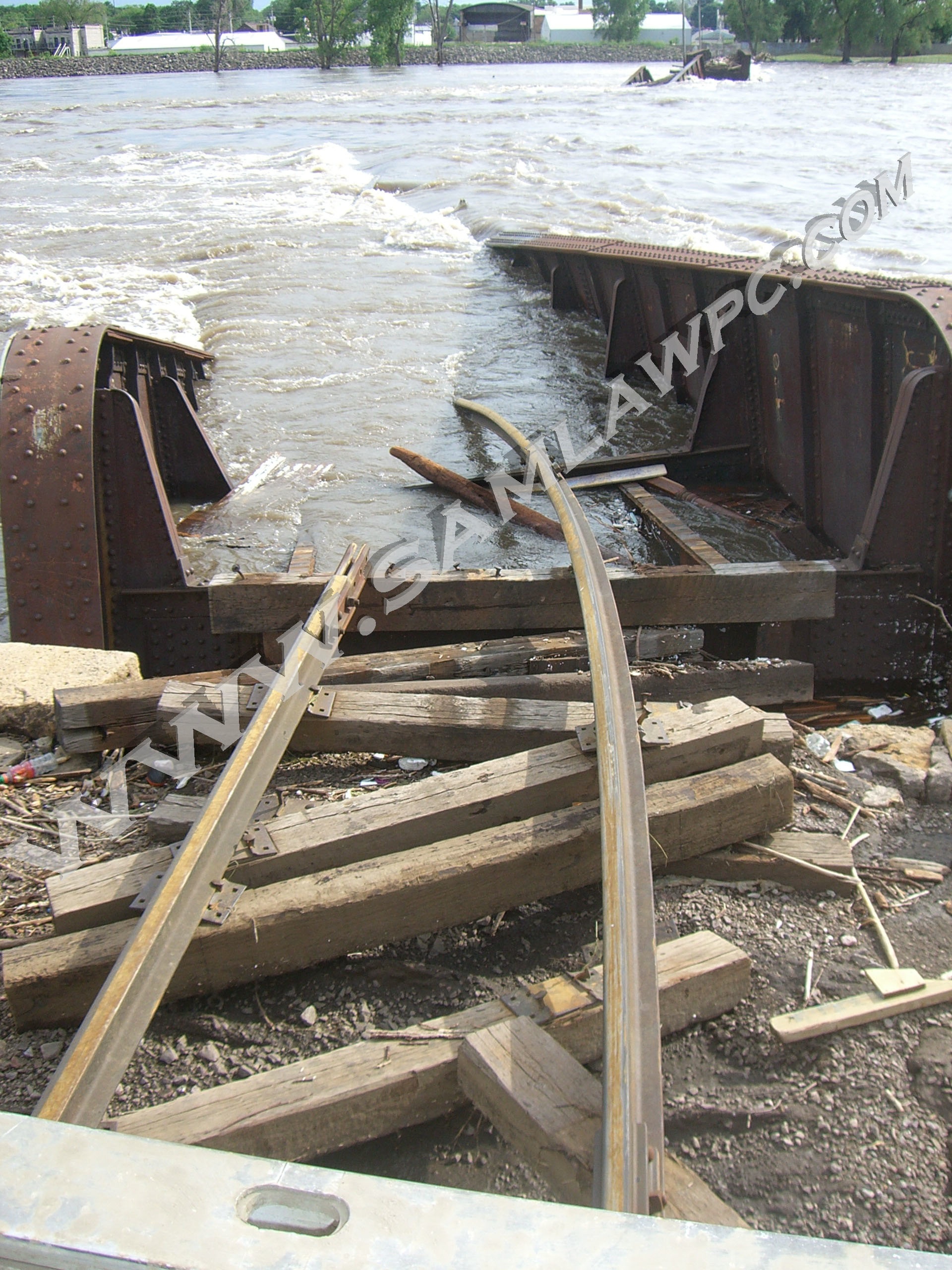 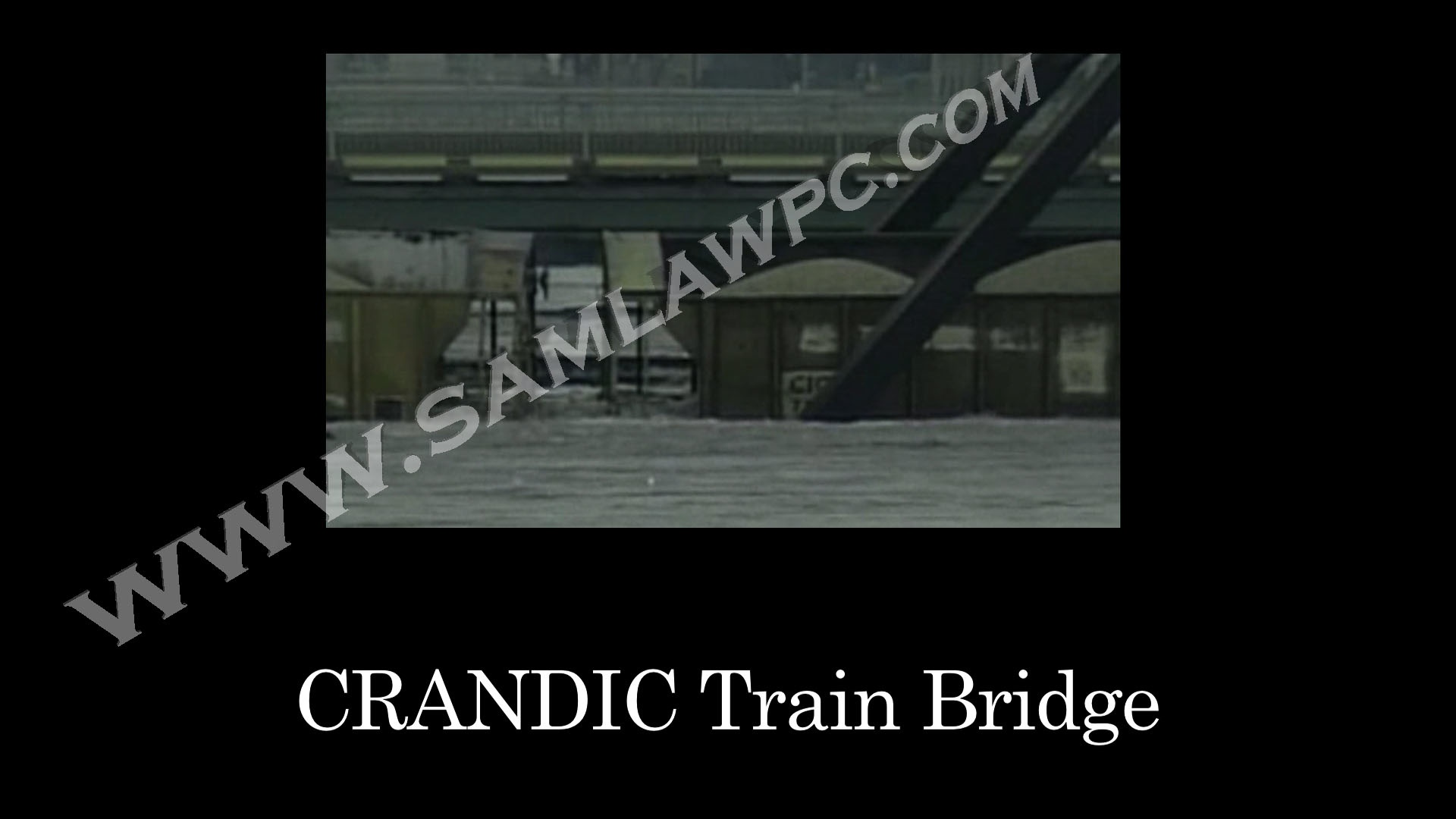 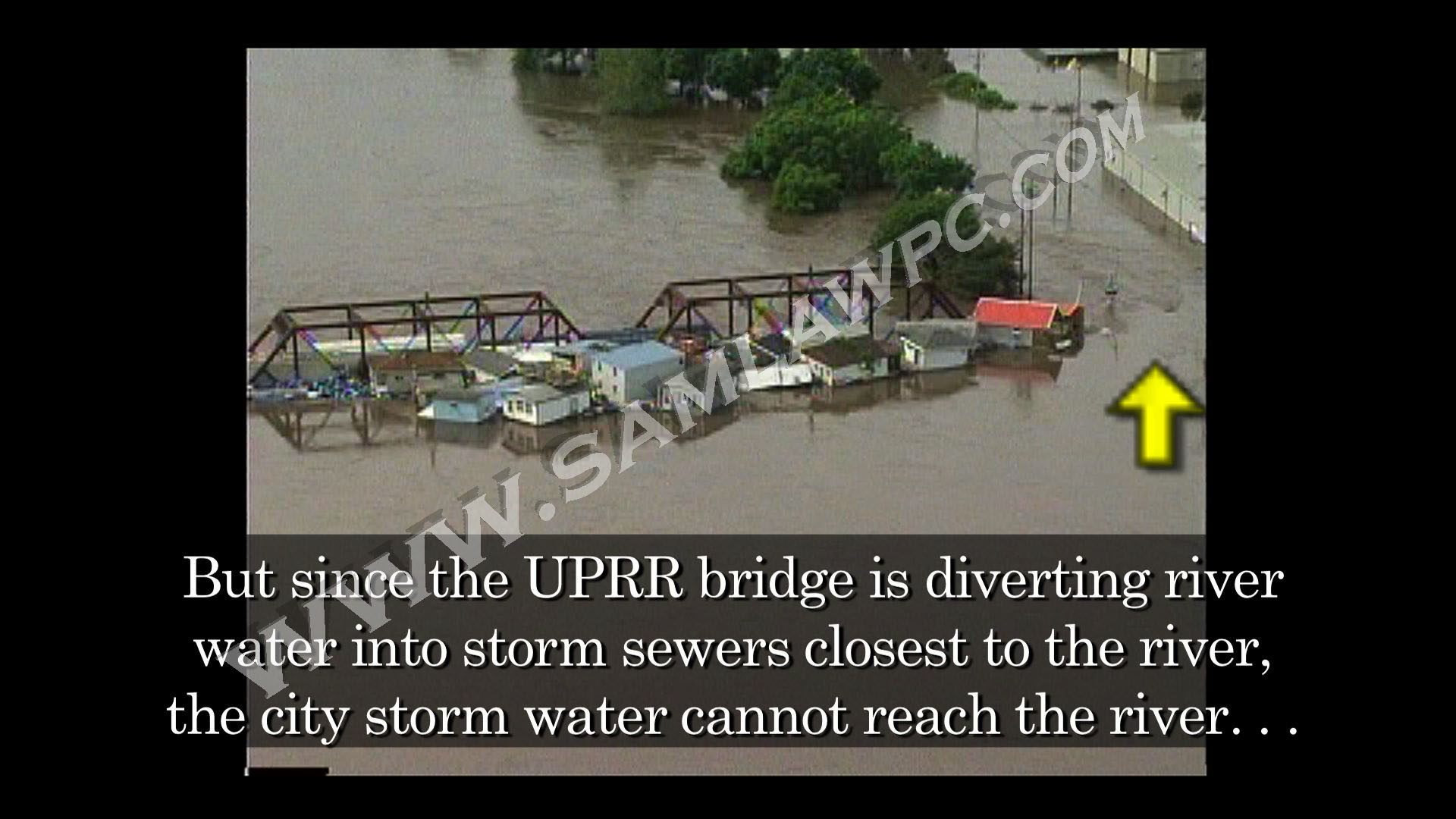 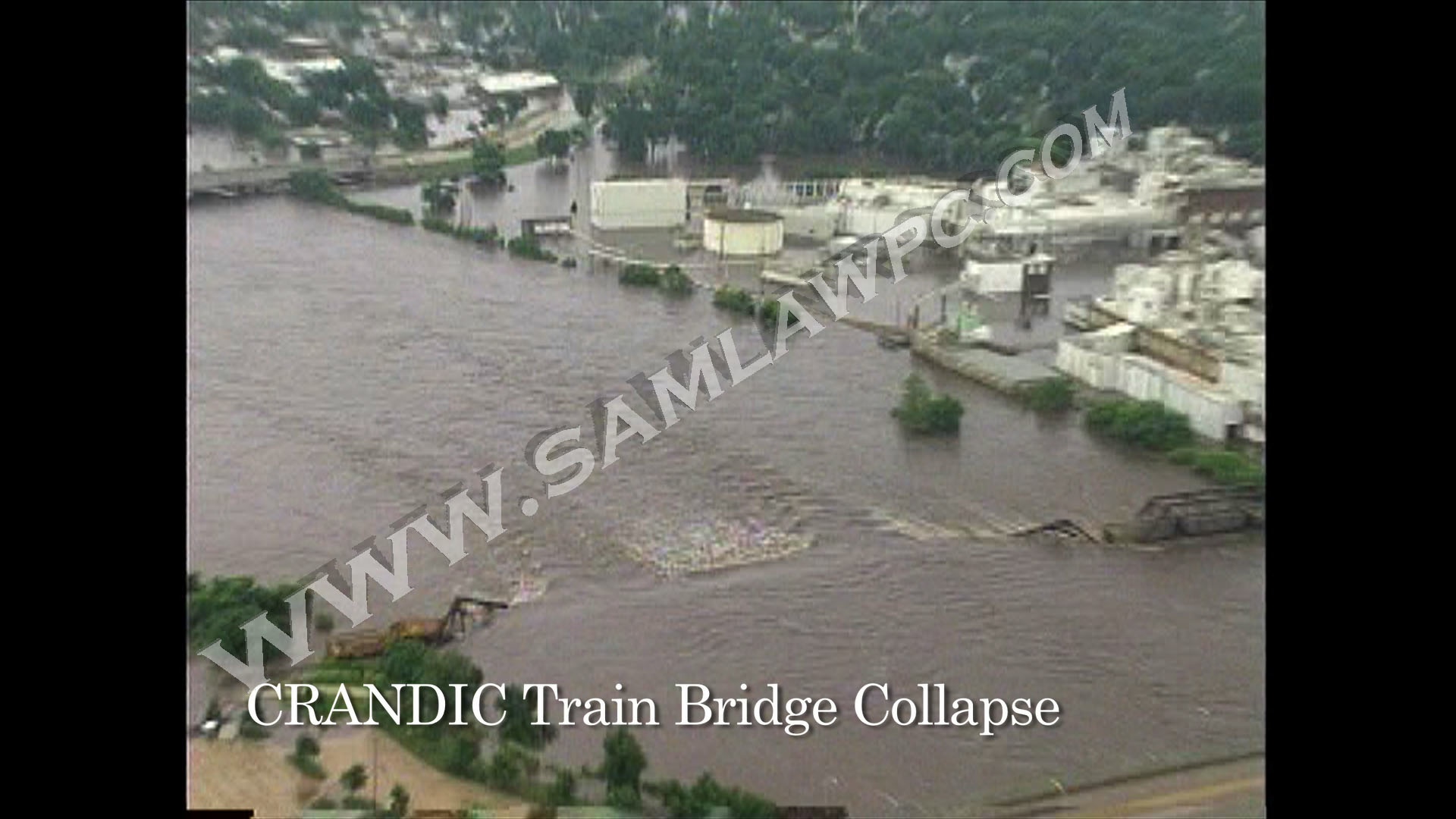 *June 13, 2008: Union Pacific and Alliant Energy/CRANDIC‘s second rail bridge (which has 9.5-feet solid iron walls) near the Cargill plant collapses into the river as seen in the photo below: 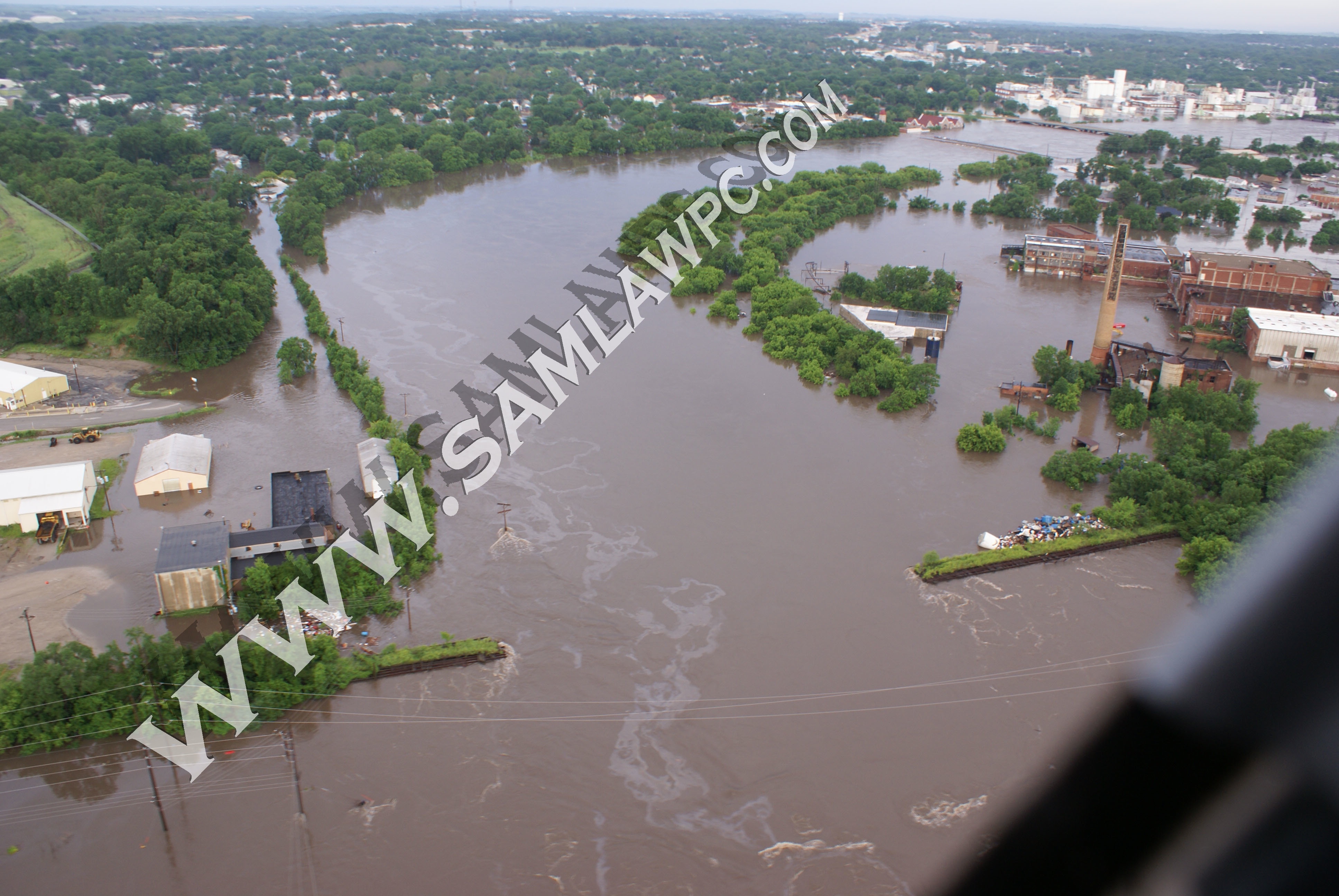 June 16, 2008 photo of Union Pacific‘s and Alliant Energy/Crandic‘s rail bridge near the Cargill plant; Defendants’ did not even attempt to put weighted rail cars on this bridge as it had been abandoned in 1980 as noted by the green vegetation growing on the remnants of the bridge.

*June 13, 2008: Two large cofferdams–part of a construction project on the Iowa River in the heart of the University of Iowa Campus in Iowa City–are squeezing the Iowa River into a gap that is approximately 75% narrower than normal, turning an annual minor flood into a catastrophic disaster. While these cofferdams–like the collapsed rail bridge in Waterloo–did not affect the flood in Cedar Rapids, the coffer dams and Union Pacific Bridge in Waterloo turned unremarkable rainfall and environmental factors into a catastrophic flood. 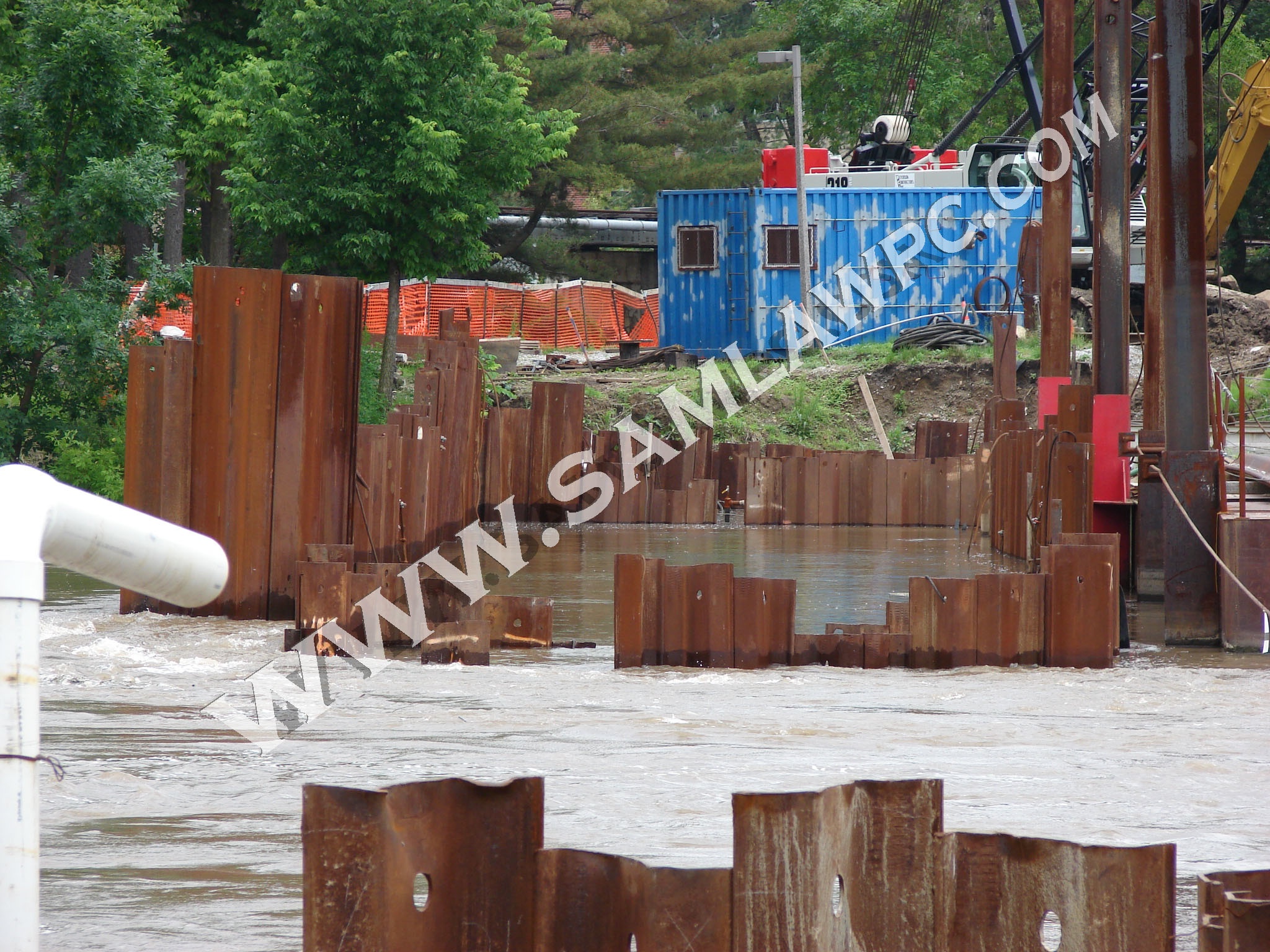 Two large coffer dams are squeezing the Iowa River by approximately 75% on the heart of the University of Iowa Campus in Iowa City; photo taken as water is rising. 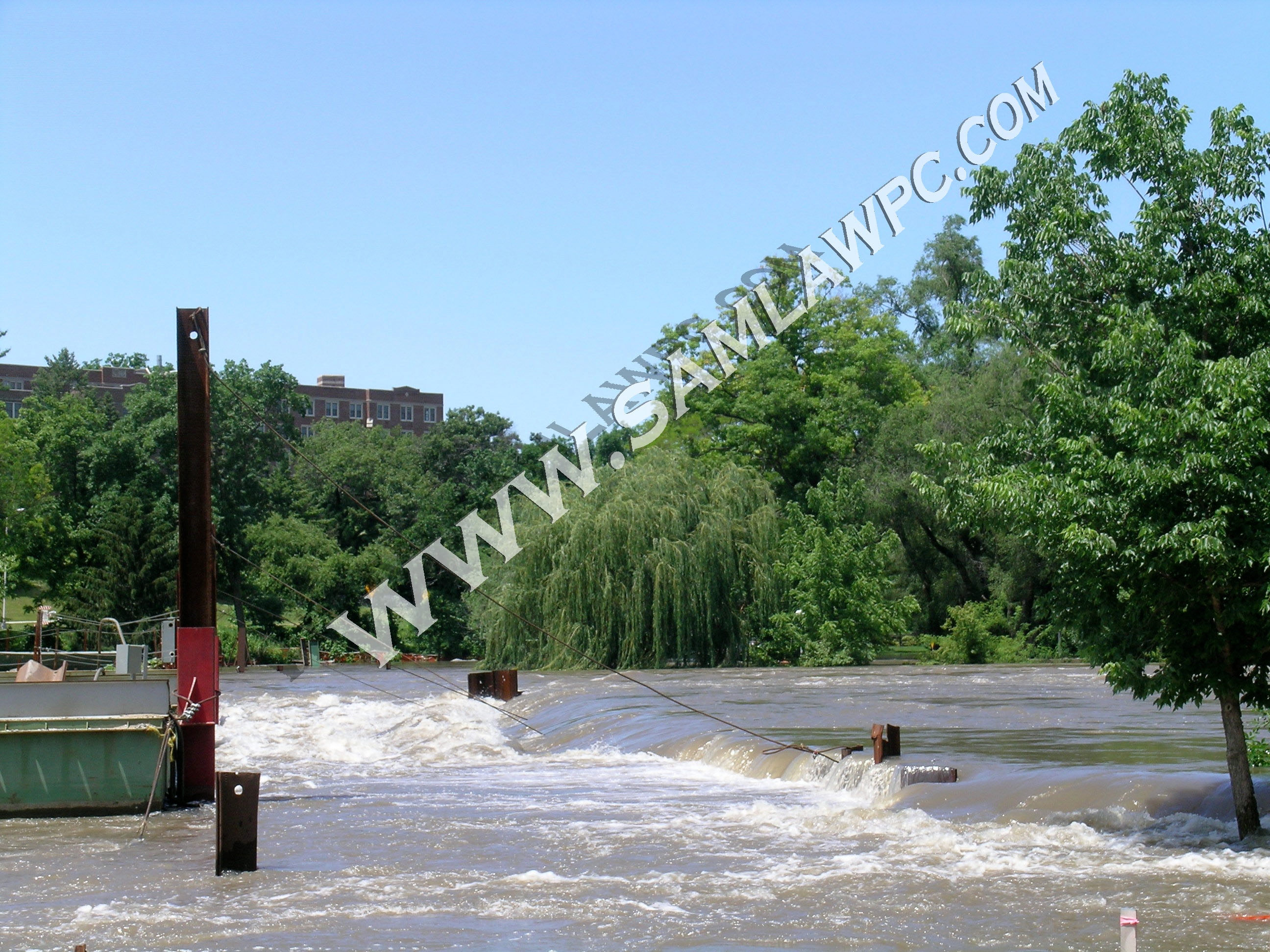 Photo taken as water is receding, revealing damming caused by one of two large coffer dams in Iowa City.

Plaintiffs’ Counsel look forward to proving at trial that the large man-made obstructions in Cedar Rapids–and not “excessive” rainfall or other environmental factors–led to the devastating flood in 2008.

Given the sheer number of people affected by the 2008 Flood, if you have information about the 2008 Flood you think we should know, or if you would like to be a potential class representative, please do not call or stop by our office, but rather, please click on our contact page here for further information.